Bert De Rycker found success as a chef when he decided to follow his instincts. He still loves conjuring new dishes – and, with the help of winemaker Thierry Constantin, picking wines to match. 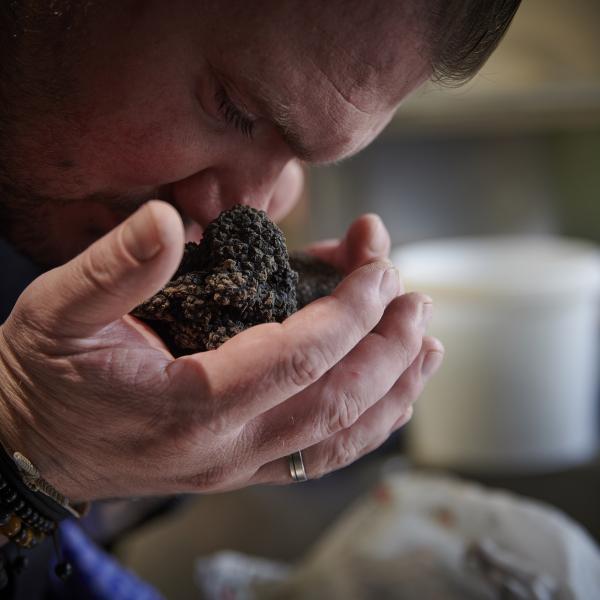 The phone call is brief: “Just come by, I’m here,” says Bert De Rycker, chef of the Restaurant Le Rawyl in Randogne. Soon afterwards, he is sticking his nose in a handful of fresh truffles, brought by the person who just phoned: a local man who says he prefers to remain anonymous. After all, what he has just brought in his basket is worth several hundred francs: Valais truffles. Bert cuts open one of the fungi and takes another sniff. “Yes, I’ll take them,” he says. “How many do you have?” Lots, the man says. He digs out a plastic container with truffles he collected the day before yesterday. The chef looks at him, intrigued, and asks how he found them. “By chance,” the man says: his children wanted a pet dog, he bought one, went for a short walk with the dog in the woods and it suddenly started digging for truffles. Bert can’t help laughing. His guest, the winemaker Thierry Constantin, stares in amazement at the find – and bursts out laughing, too.

Bert thanks the visitor, and tells him that if he ever has anything else to sell, he should just drop by. And then the chef carries on with what he had been doing: peeling black salsify. Today is actually his day off, but he wants to prepare the two dishes that we are offering here as winter recipes. The Belgian-born chef clearly often spends time in the kitchen even when his restaurant is shut. So says his sommelier, Quentin Capdeville, who drops in briefly. “He experiments, tests, tweaks, and when we come back the next day, he already has a new dish that we can put on the menu. He’s just bursting with ideas – that’s why it’s so nice working for him.”

The chef can also accept different opinions regarding his cuisine, Quentin says. “Sometimes we can’t agree which wine goes best with a dish, and we can end up having quite an argument. But then – and I think this is great for a chef – he will end up changing his recipe so that it matches the wine I’m suggesting.” Bert De Rycker reckons this is perfectly natural. “I’m a cook, through and through, and always strive to become better still. So of course I listen to others.”

He has been living here in Valais for 10 years. Originally he only wanted to spend a season in the Alps, after working for top chefs such as Thierry Marx and in “La Tour d’Argent” in Paris. In 2009, he started off at the Panorama restaurant in Mollens, and in 2013 he was appointed chef at the Café Cher-Mignon in Chermignon-d’en Haut – not so far from his current restaurant, located on the slopes between Sierre and Crans-Montana. After visiting “Le Rawyl”, he soon decided: “I saw the view and knew this is where I wanted to stay.” 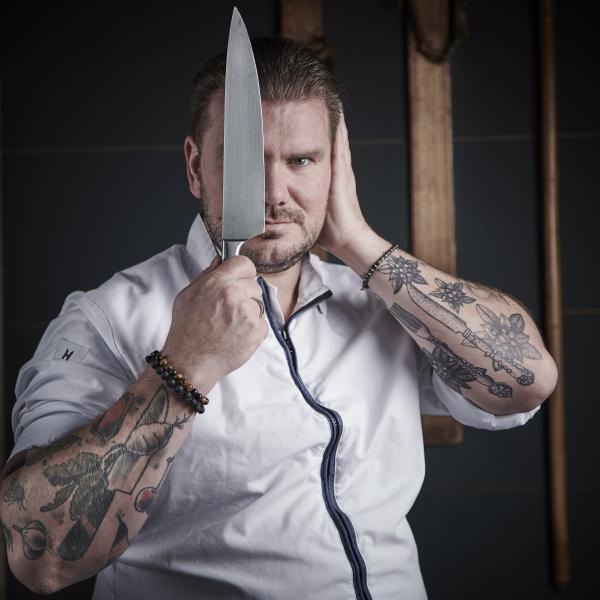 He took over the restaurant in 2016 and served mainly bistro cuisine: he wanted to restore the confidence of a clientele that had been put off by many changes of leaseholders. But a year later, he came to an undeniable conclusion: “It wasn’t working for the guests, and it wasn’t working for me.” He renovated the restaurant and decided to follow his instincts: “In Switzerland, a lot of people eat out just to eat, but in Belgium, you eat out to have a special experience.” He now knew his goal. He gambled everything – and won. The GaultMillau restaurant guide hailed him as “Discovery of the Year 2019” for French-speaking Switzerland, and awarded him 15 points straight away. “I was absolutely thrilled,” he says. “And it motivates me even more.”

His motto hangs in the kitchen, on a board above the door: “Constant quality. Always.” He does everything himself, treating his ingredients with great respect and letting them speak for themselves, focusing above all on flavour. His principle: “No more than four different flavours on a plate.” This rigour does not mean he has become any less daring. He combines beetroot with chocolate, cucumbers with coffee or raspberries with spinach. This rebellious side to his character is also on display on his arms, with tattoos of vegetables and even the words “Oui, Chef!”

He shares this love of tattoos with the winemaker Thierry Constantin; they even go to the same tattooist. “Tattoos are addictive,” they say, “you start with one and then you can’t stop.” At first sight, you might think that the two men might not have much in common: the powerfully built Bert and the wiry Thierry, former Swiss marathon champion. But they are both inspired by the desire for perfection. “My father had vines, but never made wine himself,” Thierry says. “But I always knew that I wanted to create the wine myself, from beginning to end.” 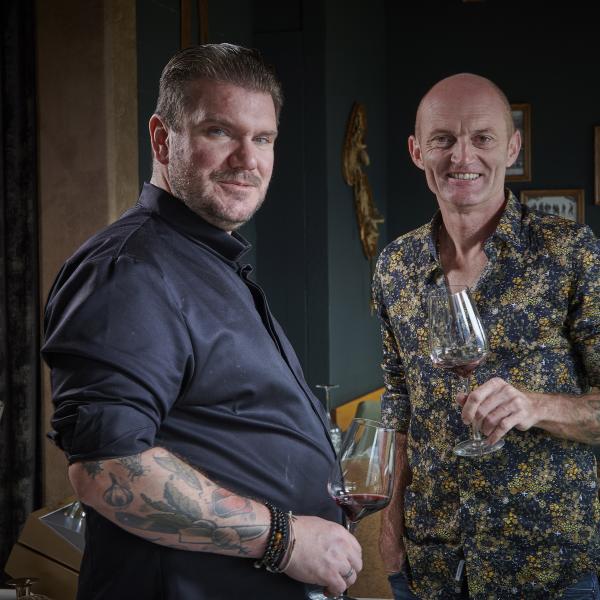 Thierry’s business goal was also clear: making wines for restaurants. “Nothing beats a perfect meal matched with the right wine,” he says. Thierry’s clients now include star chefs such as Anne-Sophie Pic in the French city of Valence and Heston Blumenthal in London. He is especially well known for his dry Amigne, a grape variety normally associated with sweeter wines. “The dry Amigne has all the beauty of this wonderful native Valais grape, but can also be served as an aperitif.” Thierry and Bert taste the wines they want to match with the different dishes. To see the two men together is a reminder that eating and drinking are so much more than just the fulfilment of physiological needs. This is a world of pleasure and sharing, of mutual respect – and admiration for the expertise of those who devote their lives to excellence.