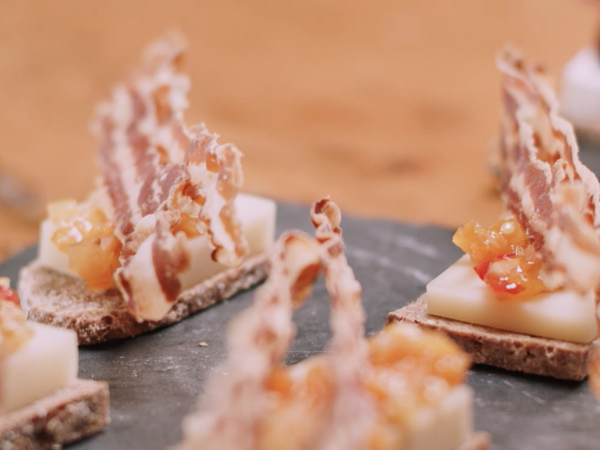 Canapé 1
Place a piece of sérac cheese on a slice of rye bread, season to taste with pepper and oil. Add a slice of beetroot and top with a crisp of dried meat.

Canapé 2
Place a piece of Raclette cheese on a slice of rye bread, sprinkle with dried apricot or chutney and top with two crisps of cured bacon.

The beetroot may also be marinated in advance in red wine vinegar.

Cut the dried meat (or cured ham) and cured bacon in thin slices. Spread the slices out on a rack. Cook in a fan-assisted oven at 110° for 40 minutes. Cut the rye bread into thin slices, then again into three. Cut the Raclette cheese into slices 6 mm thick, remove the crust and cut into smaller pieces. Cut the sérac cheese and the beetroot into slices of the same thickness as the Raclette cheese. Chop the dried apricots finely. (The dried apricots may be replaced by chutney)