Abundant sunshine, a fertile plain and imposing mountains: the terroir and climate of Valais provide the Williams pear with ideal conditions for developing its legendary aroma. Succumb to the inimitable flavour and charm of this exceptional fruit: whether savoury, sweet or even frozen, there are endless ways in which to enjoy Williams pears grown in Valais. 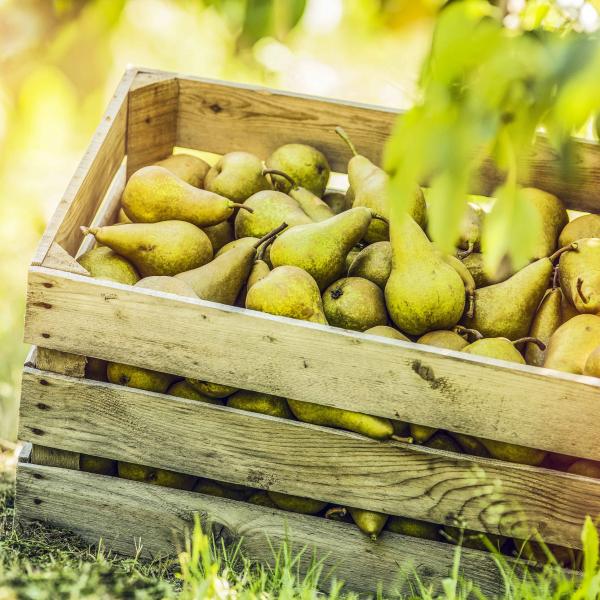 There are two different versions of the origins of the “Williams bon chrétien” pear.
According to the first, the description of “bon chrétien” – French for “good Christian” – refers to St Francis of Paola, a holy man whom King Louis XI of France summoned to his deathbed as a healer. Francis gave the king a pear seed from his native Calabria; the pear tree that grew from it was dubbed “Bon Chrétien”. The variety subsequently also acquired the name of a gardener called Williams in the late-18th Century.
In the second version, the Williams pear is said to be the fruit of the labour of a certain Mr. Stair Wheeler, who acquired it in about 1796. It was only later, in around 1816, that a nurseryman called Williams started distributing the variety more widely.

In Valais, the earliest recorded reference to pear cultivation dates from 1415. As for Williams pears, the first written record appeared only in 1904.
In 1940, a Valais winegrower called Francis Germanier planted a few hectares of Williams pears on his land. In 1945, a severe storm brought down all the fruit, which was almost ripe, rendering it unfit for sale. To minimise his losses, he had the finest and ripest fruit distilled – and Williams pear brandy was born. Thanks to the Morand distillery, founded in Martigny in 1889, Valais pear brandy subsequently gained international renown under the name “Williamine”.

Raw or cooked. Keep at room temperature for one or two days before eating, to ensure that the flavour and aromas are perfectly developed. When exposed to the air, the flesh oxidises quickly, but the addition of lemon juice will preserve the pale colour in salads. Williams pears withstand cooking very well, so they are suitable for a variety of dishes. Williams pears can be enjoyed in the form of desserts, tarts, sorbets and fruit brandies. They also offer a fine accompaniment for a brisolée (Valais dish of roast chestnuts served with cured meat, cheese and autumn fruit) or game dishes.

Smoothie with Williams pear and honey