Because of COVID-19, many activities and establishments are not available and/or are closed. For all information about COVID-19, click here.

The Moosalp pass is definitely worth the trip! From Turtmann, the route climbs 1,550m over several stages and offers plenty of surprises for cyclists who meet the challenge.

This route connects the Turtmann valley region with the Moosalp pass at 2,044 metres in altitude. It consists of a long and steady climb whose first few kilometres take place in a forest with four consecutive hairpin bends. This is followed by a straighter section of route passing through pastures along the side of the valley. You pass through the villages of Eischoll, Unterbäch and Bürchen before reaching the final, much wilder section of the pass. The route remains narrow as it winds among larch trees, offering a view over Visp as well as the other side of the Rhône Valley. You’ll have the chance to catch your breath a little during the final level section on Bürchner Alp before reaching the summit of the pass. 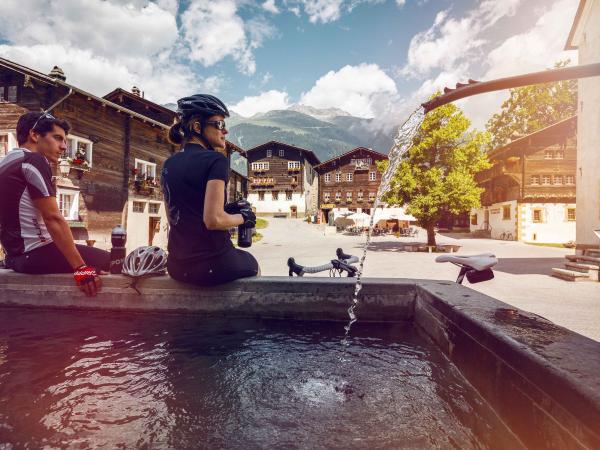 The starting post is situated by the side of the cantonal road near the tourist information area. From here, follow the cycle signs situated throughout the climb. This long ascent consists of two steep nine-kilometre sections separated by a six-kilometre section with lots of ups and downs. Pass through the villages of Eischoll, Unterbäch and Bürchen before reaching the final, much wilder section of the pass. You’ll have the chance to catch your breath a little during the final level section on Bürchner Alp before reaching the summit of the pass.

At the summit, don’t miss out on the delicious mille-feuilles at the Restaurant Moosalp!

Frequent train connections to Visp from all over Switzerland via the Lötschberg tunnel or the Simplon Railway.

Take cantonal road 9 from Brig or Sierre to Visp.

We recommend: bike in excellent working order, helmet, gloves and bell, clothing suitable for the weather (always carry a waterproof), food and drink.

Strictly respect the Swiss traffic rules. Please note that you are running the tour at your own risk and all liability is refused. Please be considerate to plants and animals. For your own safety, wear an helmet every time you ride a bike.Emergency numbers: 144 Ambulance / 117 Police / 1414 Helicopter Rescue (Rega).

The tourist office in Turtmann and in Visp has brochures and information material about road cycling in the region.