Florent Massy and Reck are looking forward to winter. The patroller-tracker’s golden retriever will soon be starting his avalanche dog training. 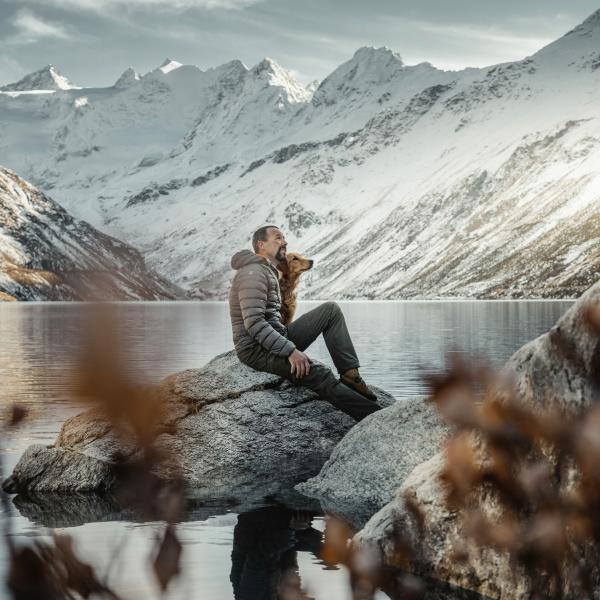 As we arrive at the Moiry dam, a woman asks Florent Massy: "Is this the new one?". Passers-by recognise him since the RTS Gens d'hiver (Winter People) programme began broadcasting. Florent nods and introduces his young golden retriever: "His name is Reck and he is seven months old today. Strangers approach him several times daily. Fortunately, it is no longer necessary to keep explaining that Reck is Shadow's successor." In the meantime, people have learned that Shadow is no longer with us. To begin with, it was really hard to always have to tell what happened to him." Shadow was Florent's companion for 11 years, his colleague at work and his faithful friend, the one who followed him everywhere like a shadow. Together they took part in a dozen interventions in search of avalanche victims. It was this pair that viewers discovered in Gens d'hiver. In January 2019, RTS followed them during their week of preparation for the certificate enabling the master and his dog to continue their work as avalanche rescuers. Between filming and broadcasting the programme a year later, something terrible happened. Shadow swallowed something that perforated his stomach and caused a severe infection. Despite two operations, Shadow did not recover. He was in pain and his heart was weakening. Florent and his family decided to put the dog out of his misery and let him go. "It was horrible, as if I had lost a son", recalls Florent. “It took me weeks to grieve." Even today, as he tells this tragic story, he still has tears in his eyes. 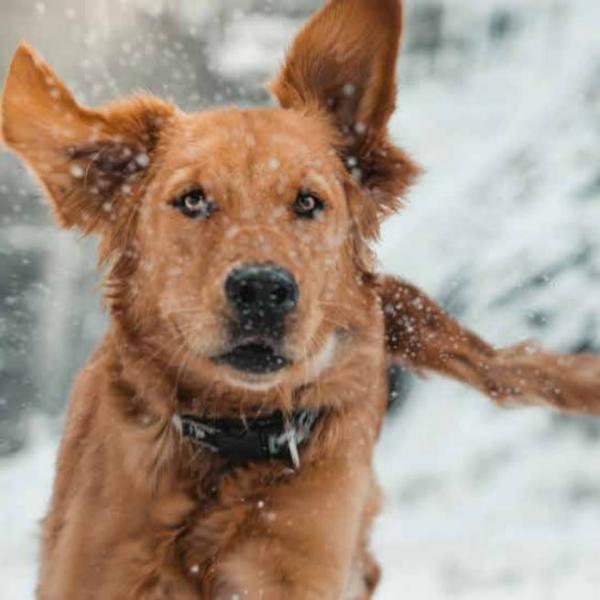 Shadow was an extraordinary dog, extremely warm and sociable." Shadow had become a bit of a mascot for Gens d’hiver. When the time came for Flo, as his friends call him, to welcome the other six participants in the show to his corner of the Val d'Anniviers, Shadow once again demonstrated his skills. As an experienced avalanche dog, he managed to find the fake avalanche victims played by the participants in no time at all. Florent, who had always dreamed of being an avalanche dog handler, embarked on the adventure when Shadow was still young. During all these years of training, a relationship of trust and powerful mutual understanding had developed between them. "We relied on each other," says Florent. “He knew exactly when things were serious. One look was enough to make him impatient for me to finish putting on his work harness so that I could go on a mission". For the dog, these interventions were like a game, with the added bonus of a generous chunk of cured sausage once the task was completed. The greatest honour for a dog handler is of course to be able to save the life of an avalanche victim. This never happened to Florent with Shadow, but perhaps one day the latter’s successor will have this honour? But first of all, Reck has to be trained. In December, he will take the entrance exam for the avalanche dog training week scheduled for the end of January 2021. He must prove that he is ready to follow in Shadow's footsteps. Florent is confident. Reck is a well-balanced dog. A distant relative of Shadow, he comes from the same kennel. At seven months of age, however, a dog is still in the middle of puberty and busy testing limits. 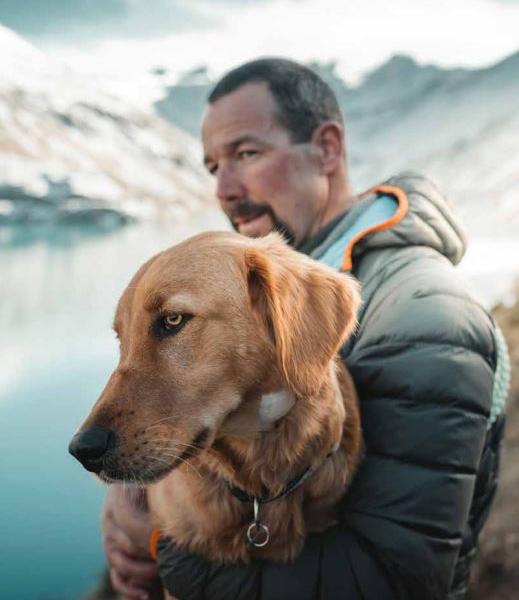 Stroll by the reservoir

This is noticeable during our walk at the Moiry dam: Florent gently recalls him – "Come here, buddy" – reminds him gently of Florent as soon as Reck is no longer in his field of vision. As he explains: "With a golden retriever, you always have to be careful what he eats, because these dogs have an annoying tendency to swallow everything they find. Last Saturday I had a big scare. Reck gnawed through some wood and swallowed a piece, which got stuck in his throat a few millimetres from the carotid artery. The area swelled up and it reminded me of what happened with Shadow. And the worst part of this story is that Shadow fell asleep that same weekend a year ago. I was so relieved to see that Reck was eating and playing normally, so he was fine!" Reck still had to have surgery a few days after this mishap to remove the piece of wood from his throat, but he is now back to full health. 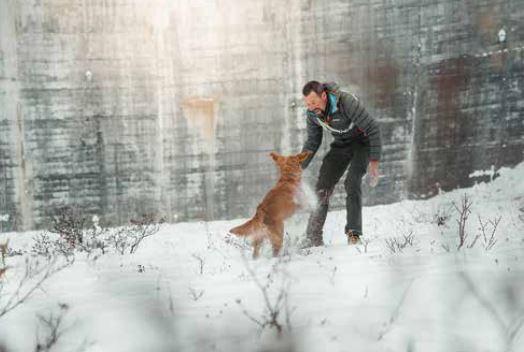 Requirement for an avalanche dog

If Reck gets on well with his four-legged colleagues at the avalanche dog school, he should be able to start his training. This is a basic requirement for becoming an avalanche dog, it has to be sociable. It also needs to know the basic commands, such as sitting, lying and walking. Over the last few months, Florent, his wife, Julie, and their 12-year-old son have been working on these different commands with their dog. "So as to help Reck get accustomed to the cold, he sleeps outside in his kennel and not with us in the house”, Florent adds. This is important for these dogs, who are put to the test during an operation, as well as during the training week, when they must be able to spend several hours in the snow. During their training, they will have to learn to locate buried people or objects belonging to them as quickly as possible and to dig efficiently. The dogs will also have to get used to flying in a helicopter, where they must remain quiet so as not to inadvertently operate the levers or buttons of the helicopter with their legs or by wagging their tail “It takes three or four years for an avalanche dog to reach the best level”, explains Florent. Shadow had definitely achieved peak performance. He had earned his retirement."

During the winter season, Reck accompanies Florent to work every day, but stays in the resort's kennel to save his strength should he need to intervene. Meanwhile, his master, the patroller-rescuer, ensures the safety of the slopes in the Grimentz-Zinal ski area or comes to the aid of injured skiers. At lunchtime, Florent meets up with his buddy Reck and the two have fun in the snow. Says Florent with a laugh: "As soon as he's away from me, I miss him.”