From 6 June, all leisure and entertainment businesses and tourist attractions may reopen. For further information, click here.

The second stage of the long-distance Chemin du Vignoble («Vineyard Trail») leads from the pretty medieval village of Saillon to the capital of Valais.

Three versions of the Chemin du Vignoble lead through the sunny vineyards of the Rhône valley: for walkers, cyclists and motorists. Of these, the 4-stage hiking trail, totalling 66 km, offers the most intimate experience of the Valais vineyards and the colourful culture surrounding them. Stage 2 links two of Valais’ most fascinating sites: the medieval village of Saillon and the capital city, Sion. Each has an ancient heart with towering crags topped by castles, and both are well worth exploring. The scenery boasts this operatic grandeur all along the hike. Soon after leaving the twisting alleys of Saillon, the trail crosses the river La Salentse, at the entrance to a gorge steeped in legend: it was here that Joseph-Samuel Farinet, the 19th-century counterfeiter known as the «Swiss Robin Hood», hid from the authorities. This is just one of several rivers that the trail crosses as they emerge from spectacular, deep gorges before joining the waters of the Rhône. Above Leytron, the path passes below high cliffs before traversing the giant alluvial fan of Chamoson. The shallow, sweeping cone is formed of rubble that cascaded down from the peaks above in prehistoric times; today it is blanketed in vines. The exceptional variety of the topography and geology along the route has made for a tremendous diversity of wines. Many of the villages are associated with a particular grape variety: for example, Humagne in Leytron, and Amigne in Vétroz. All along the way, atmospheric restaurants and cellars offer the chance to taste them, along with local delicacies.   Highlights Saillon – exquisite medieval village. Attractions include the Bains de Saillon spa, vineyard trail, via ferrata and suspension footbridge across gorge. Dramatic scenery of cliffs and canyons, spectacular views throughout Many wine-tasting opportunities in ancient villages framed by terraced vineyards Sion – thousands of years of history: castles, museums, cathedral and chapels 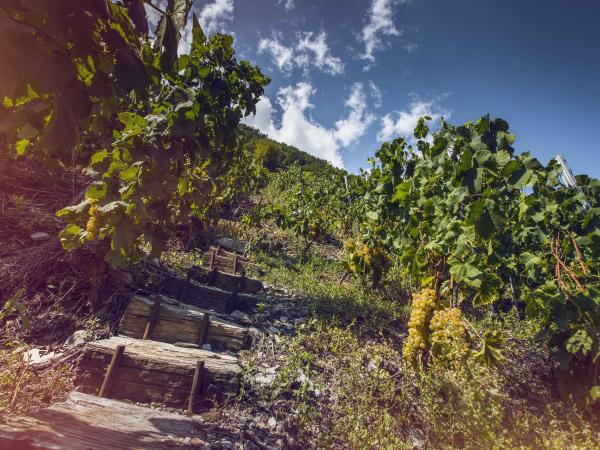 The closest bus stop to the starting point of this stage of the Chemin du Vignoble is «les Moilles» on the main road that runs along the foot of the crag on which old Saillon stands. A lane leads from here up to the medieval village centre and the trail proper.

The route is well-signposted and easy to follow. It leads close to a number of attractions worth a visit in their own right, including the Swiss Museum of Speleology just above Chamoson. A delightful wine trail links Chamoson to the medieval village of St-Pierre-de-Clages; just before Sion, a nature trail explores the reed beds around the peaceful lake just below the Mont d’Orge.

The trail finishes at the northern edge of Sion, where the river La Sionne emerges from its ravine. Walkers have the choice of taking a bus down to the railway station – or, time- and energy-permitting, walking through the historical city centre, beneath the castle and fortress that look down from Sion’s iconic twin crags.

Check with local tourist offices for special events en route: many of the villages host wine festivals, especially in autumn.

Train to Martigny or Sion, then postal bus from either town to Saillon (bus stop «Les Moilles»). At end of walk in Sion, take bus from bus stop «Brasserie» to railway station – or simply walk downhill through the historical city centre (2 km). Find full timetable information at sbb.ch.

A9 motorway, exit 23 (Saxon) if approaching from the west or exit 24 (Riddes) if driving from the east. Follow signs to Saillon.

More information about the destination:

The tourist office in Sion has got brochures and information material about hiking in the region.