The people of Val d’Hérens in Valais are proud of three things: their “patois” dialect, the Dent Blanche peak and their Hérens cows. In summer, high on Alp Mandelon, enclosed by in the wild mountain environment you’ll find four of these proud and pugnacious beasts belonging to Morgane Seppey. She and her family keep a herd of Hérens cows, thus preserving a hundred year-old tradition. 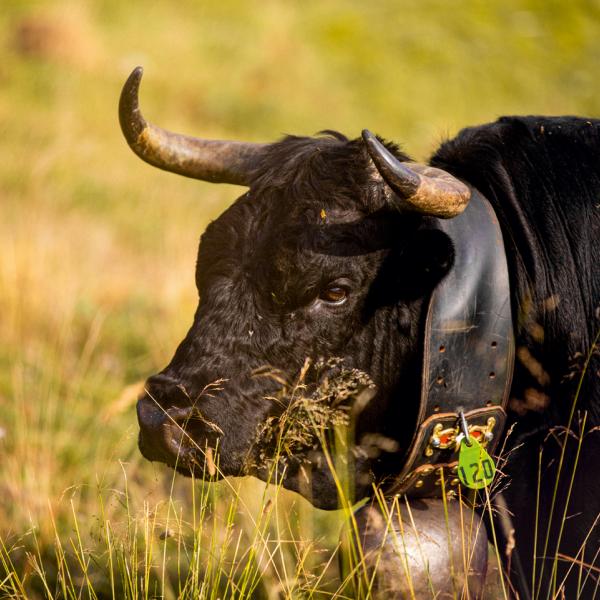 They are the pride of the valley

Horns clack against one another and the bells ring out loud and clear. Two muscular Hérens cows weighing 600 kilos start fighting one another. “Nothing to worry about - it's part of their nature, and they only fight among themselves,” explains Morgane Seppey with a laugh. She owns four out of the 100 or so cows that spend their summers up here on Alp Mandelon. Bagdad, Pascha, Pink and Salsa are their names. Hérens cattle or “les Vaches d’Hérens”, as they are called in French, are the pride of the valley. This is why they were named for the valley. When they fight, they butt heads and lock horns. When one cow feels that she is the weaker one, she abandons the fight. “They rarely hurt themselves doing this,” explains Morgane. 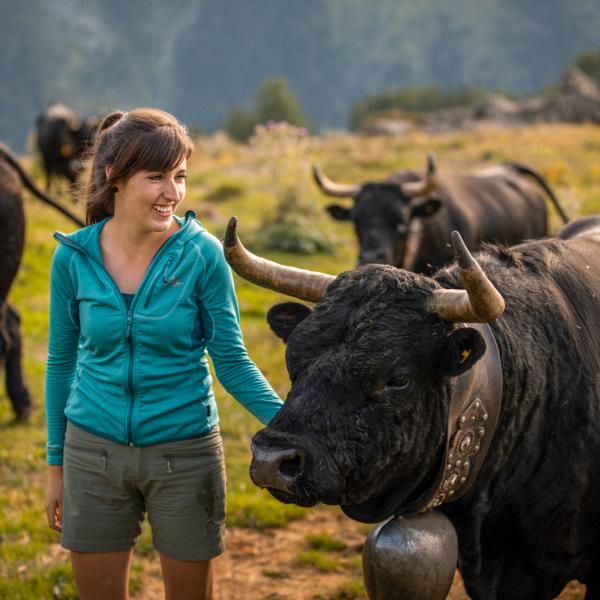 Our passion – our tradition

Hérens is an old breed of domestic animal which is primarily raised in Valais and the Aosta Valley. There are around 6,000 Hérens cows remaining in Switzerland. “Here in the valley almost every family keeps Hérens cows. They're our pets, like you have cats or dogs,” says Morgane with a proud smile. Morgane's primarily works as a structural draughtsman. Keeping Hérens cows is a hobby for her, as it is for most people in Valais. “Hérens cows are our passion – our tradition,” she says. It's a tradition that's been passed down from generation to generation. These strong animals, which may seem a bit frightening, also have a gentle side. They become attached to their owners and even like to be petted. “Since we take care of them every day, we develop a close relationship with them,” she adds. 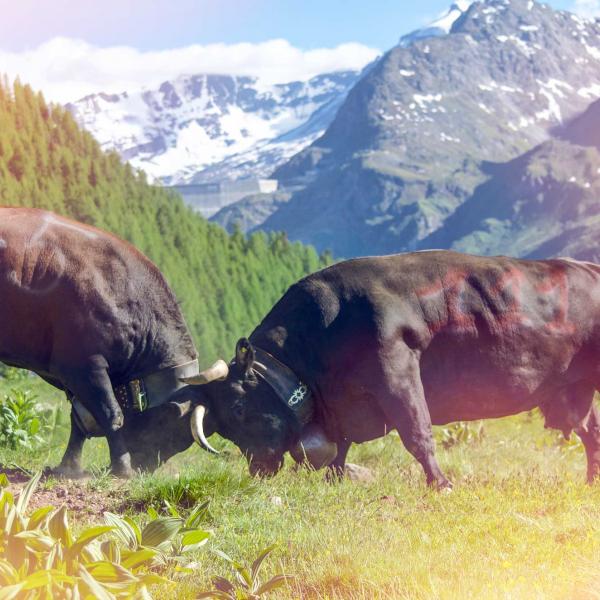 In a fighting mood...

Hérens cows don't give much milk. Instead, they are famed for their combative nature. “Now at the end of the Alpine season, they don't fight as much because they've already established a hierarchy,” explains Morgane. But in early summer when the herd is driven up to the Alpine grazing meadows, that's when they fight the most. “This is when the cows are really in a fighting mood,” says Morgane. It’s when cows belonging to different families encounter one another for the first time. The cows fight to establish their social standing in the herd up on the mountain and to see who will be the “queen of the herd”. This social order is necessary if the cows are to live together during the summer. The queen enjoys several privileges: she is responsible for leading the herd, will be crowned queen at the end of the summer grazing and will be robed in royal attire for the seasonal descent from the mountain. 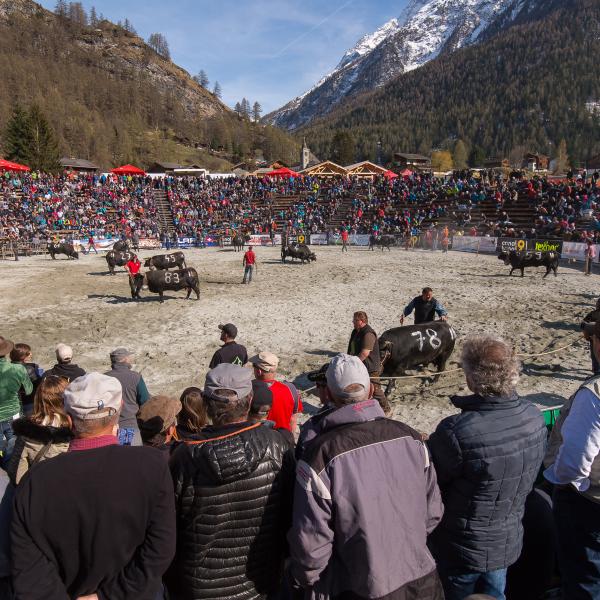 The naturally feisty temperament of the Hérens breed prompted locals to organise cow fights, or “Combats des Reines” as they are called in French, back in the 1920s. These traditional cow fights are a great experience for locals and tourists alike due to the friendly atmosphere and plentiful supply of raclette. Separated into categories by age and weight, the cows seek out their opponents in the ring. The cows that run away or lose the fight are eliminated. “Rabatteure” are in charge of the welfare of the animals during the fights. The winner in each category is crowned queen and will then go on to fight for the “Queen of the Queens” title in May. The Hérens National Cow Fighting Championship in Aproz attracts almost 10,000 visitors and has long been a favourite among genuine Swiss traditions.

Would you like to see the Hérens cows fight on their home ground? Then get started right away to see this spectacular cow fight or go to an alp, such as Alp Mandelon. Take the PostBus from Sion to Evolène, Village. What you will see along the way: the unique earth pyramids of Euseigne. They are the gateway to Val d’Hérens. The basin of the high valley opens up behind them, ringed by magnificent peaks, the first among them the majestic Dent Blanche. Once you arrive at Evolène, have a wander through the tiny streets that thread their way through the historic wooden houses and barns.

It's a 20-minute ride in the chair lift to Alp Chemeuille, where the gorgeous approx. four-hour hike begins. About an hour into the hike in the stretch leading up to the alp, there is a small lake. Here it is well worth stopping off to enjoy the stupendous mountain scenery. The panorama stretches from Dent Blanche to the famous Matterhorn. A well-marked path leads you further on to Alp Mandelon. With a little luck, you might see the Hérens cows grazing directly in front of the restaurant’s terrace, when their fighting can be a wonderful spectacle. You'll surely enjoy the landscape and the homemade traditional dishes. A real insider tip – but maybe not for long. If you go back to the valley, you will zigzag back down to the Praperrot bus stop, and from here you can go back to the villages of Val d’Hérens or on to the Rhone Valley.