“I grew up on the slopes in Bruson.”

His father worked on the slopes, his mother served food in the restaurant: for thirty-year-old Justin Murisier, his skiing career started quite naturally at the heart of his home town of Bruson. He recalls how it all began.

Bruson in the Val de Bagnes:  Justin Murisier grew up in this small winter sports resort vis-a-vis from Verbier. The Valais native is one of the popular members of the Swiss ski team.  Here in Bruson – or rather a few hundred altitude metres above the village – is where it all began: “My grandmother ran a mountain restaurant, where my mum helped out. My dad worked on the slopes. In other words, I basically grew up on the slopes of Bruson. We spent most of our time there and we all skied almost non-stop. At some point, my sister and I signed up for the ski club. It was all very natural for us.” 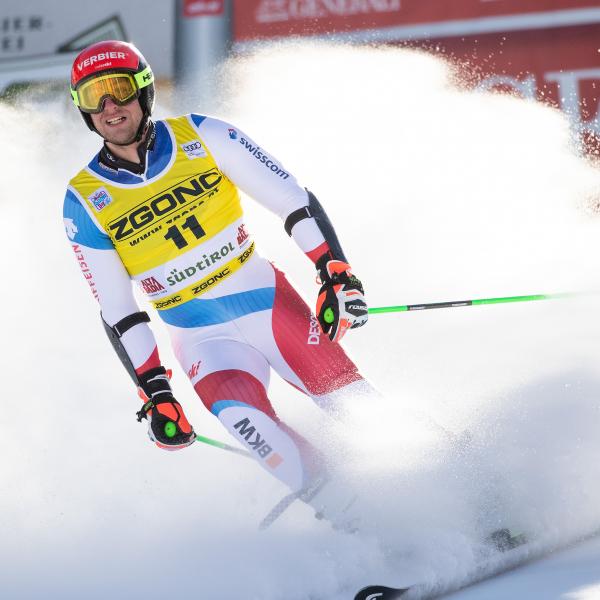 Which is not really surprising, since skiing and winter sports in general are just about everywhere you turn in Val de Bagnes. “My dad was also a member of the ski club. But the biggest influence was the success of my cousin William Besse.” Also from Bruson, Besse won four World Cup races in the 1990s, including the downhill on Lauberhorn once.

Drawn to the speed disciplines.

This probably also explains why Murisier, like his cousin, is increasingly drawn towards the speed disciplines. Before that, he had been known mainly as a giant-slalom specialist. Last year he competed in more downhill races, and at the end of last season he became Swiss champion in the super-G.

However, the start to the new winter season did not go entirely to plan: Murisier had to interrupt his training in Chile because of back pain and submit to an operation on an intervertebral disc. This meant he missed the races in Sölden, but nothing prevented his season start in North America at the end of November.

He will be able to defend his Swiss championship title on his doorstep in March 2023, as the races will be held in Verbier this year. But as Murisier has already announced, the medals will not be the focus for him. “It’s fantastic that my region is hosting these championships. My family will be at the slopes to watch, along with many friends who weren’t able to come to a World Cup race in the winter. Although, I also hope I’ll be able to enjoy the championship and just relax in the grass sometimes.”

Although Murisier spends months travelling the world in winter, he is still proud to call Verbier and Bruson his home. “Verbier stands out from the crowd of winter sports resorts in winter. Here you have mogul slopes, easier routes, freeride options... You’re fairly spoilt for choice. Besides, the après-ski places are famous and in winter there’s always parties in the evenings,” says Murisier with a laugh. And immediately clarifies that, of course, he can’t take part in après-ski during the season.

Murisier himself can be found on the home slopes mostly towards the end of the winter. It is then that he enjoys skiing not for World Cup points, but just for fun. “Firstly, the season is coming to an end, there’s more space. And in the morning the quality of the snow cover is still excellent; for lunch I can eat on the terrace of a restaurant in the sun without freezing.” This, Murisier adds, against a panoramic backdrop of several four-thousand-metre peaks looming majestically on the horizon.

Murisier got to know the valleys and mountains of the Alps as a skier. There’s something else he particularly cherishes about his homeland besides the picture-postcard landscape: the people. “At first glance, we Valaisans may seem a bit rustic. But tourists obviously also see our hospitable side, so they come back season after season.”