He is French, but has spent nearly half his life in Crans-Montana: top chef Pierre Crepaud loves Valais and celebrates it in his cuisine.

Pierre Crepaud cannot sit still. He greets a guest on the terrace, sits down for a moment, runs off again to take a phone call, and finally we find him again in the wine bar of the restaurant LeMontBlanc, where he is photographing a dessert with his smartphone in the company of his patissier, Pierre-Alain Rouchon. “Today, you really have to be on Instagram,” he explains. With a couple of clicks, he posts the picture of the chocolate log decorated with mushrooms of chocolate ice cream under the title “Autumn walk”. 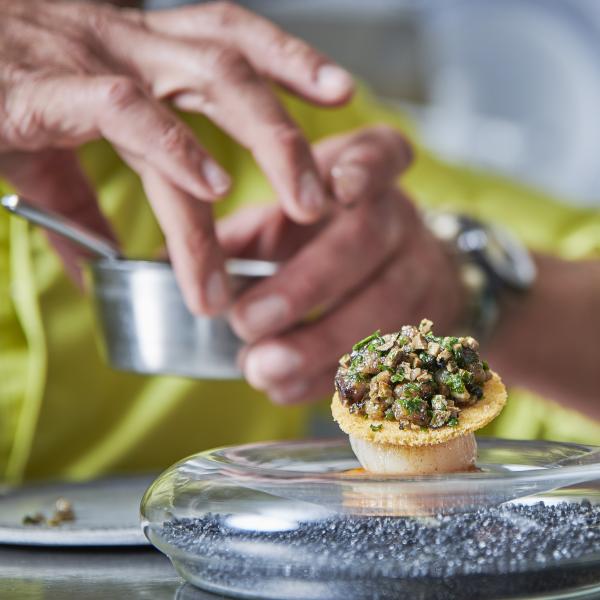 17 points in the Gault&Millau guide, a Michelin star since 2015: Pierre Crepaud has worked his way to the top thanks to his passion for cooking and his ability to combine his talent, knowledge and experience to keep innovating. Since 2009, he has headed the team in the kitchens of the 5-star LeCrans Hotel & Spa in Crans-Montana. Located on the mountainside at the upper edge of the resort, the hotel can be reached on skis. It is quiet and peaceful up here, and the views take in the 4,000-metre peaks of Valais, the Rhône valley and Europe’s highest mountain. LeMontBlanc is also the name of the restaurant, whose sweeping semi-circular front with panoramic windows showcases the glorious views. Pierre Cre­paud’s creativity is not limited to his cookery: he always writes a text to frame and explain each menu. The dishes themselves have names such as “Off the beaten track” or “When the ocean comes to Valais”. 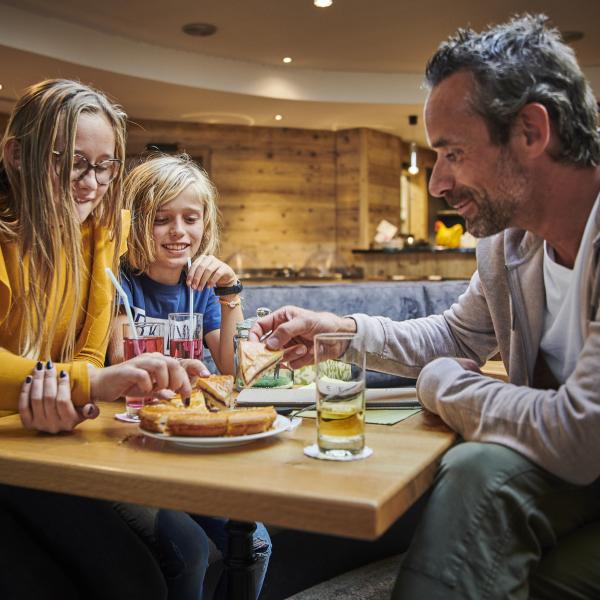 Pierre Crepaud’s cuisine straddles land and sea. Originally from the French city of Valence, the chef gained experience mainly in the south of France, with a stint in the French Alps. Then came his first post in Crans-Montana, which was to prove decisive: Pierre Crepaud is now firmly attached to Valais. “I met my wife here,” he says, “we built ourselves a house, our children go to school here. I have spent 20 of my 45 years here, and I don’t think I will ever leave. This is my home.”

He has also found friends here who, like him, feel a strong connection to the region and celebrate Valais in their work. He met the winemaker Ismaël Bonvin, who runs the Cave Le Tambourin in Corin, through his second passion, sports: together, they go ski touring, climb mountains and run along alpine trails. For Pierre Cre­paud, the daily runs between lunchtime and dinner are vital: “Everyone has to have something that allows them to switch off for a while. For me, it’s sport. On my daily runs through the forests and meadows, I don’t think of my work, but I find inspiration in nature. I often discover a plant or a flower that we then include in our menus.”

His favourite colour is green. As soon as he became head chef, he had green jackets made, and he always wears green trainers in the kitchen. That is also why every dish includes something green – almost always harvested in the vicinity and used either as a tasty decoration or made into a jus or essence. Valais, with its wealth of local produce and authentic products, constantly stimulates the chef’s creativity. The same goes for the winemaker Ismaël Bonvin. “He is never content with things as they are,” says Crepaud, as he tastes a young wine with his friend, “he’s very dynamic.” LeMontBlanc proudly showcases the work of local winemakers: as the sommelier, Sara Chaves-Guimaraes, explains, “We always recommend Valais wines.” Also by the glass: diners can choose from 16 red and 16 whites served by the glass, one of the largest selections in the whole canton. 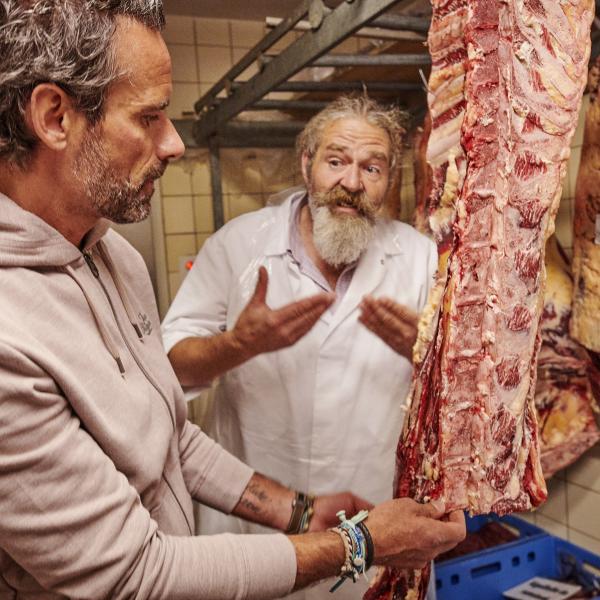 In other ways, too, Pierre Crepaud favours suppliers from Crans-Montana and surroundings. He buys most of his meat, for example, from Serge Mudry, the village butcher, and enjoys calling in himself. Is the chef a demanding customer? Serge Mudry hesitates for a moment and says: “Only fussy customers spur suppliers on to keep improving.” He then proudly shows an entrecôte that he has aged on the bone for a whole month. The chef slaps him on the shoulder and names an additional advantage of buying ingredients from local businesses. “Serge always delivers. Even on Sundays or in the evening, if necessary.”

The menu at LeMontBlanc changes almost every other day. “We have many customers who come two to three times a week,” the chef says. Pierre Crepaud does not chase after honours, however. “I just want to defend my 17 points and Michelin star by offering dependable and innovative cuisine,” he says. “Cooking consistently at a high level is a constant challenge.” He and his team take great pleasure in coming up with new creations. “Our guests should be thrilled and also surprised by our dishes,” he says. As a boss, he is “cool”, according to his sous-chef Yannick Crepaux, who has been cooking at his side for 15 years. “Longer than either of us has been married.”

And what will the two gastronomic wizards do with the huge courgette that a farmer brought them this morning? Part of it will certainly feature in today’s lunch menu, which costs 55 francs, takes 55 minutes and includes 5 courses – as it has done for 10 years. “I love reacting to unexpected deliveries from my suppliers,” says Crepaud.

Despite his inventive spirit and taste for novelty, Pierre Crepaud remains constant in certain things – such as the organic eggs gently cooked at just 63 degrees, dubbed “Timeless” on the starter menu. “Our clients love them,” he says. His gourmet puzzles are also highly popular: treats for the taste buds that invite guests to guess the ingredients. He will also continue to offer a gourmet children’s menu, and give out candy floss at the end of the meal. “My children gave me the idea. We now have a professional machine in the kitchen,” says the chef. If children are among the guests, they are invited to make the candy floss themselves. Now and again, his children Tom, 10, and Nora, 14, cook for him, too. Nora especially enjoys baking. Does she get her recipes and skills from her father? “No,” she says, “from videos on YouTube.”  Pierre Crepaud shrugs stoically. And posts the next photo on Instagram.

The fruit of a summer