In Valais, the end of winter is synonymous with Carnival. This secular tradition is still strongly rooted in the canton; the festive and convivial streak in the Valais character ensures that everyone enjoys the extra opportunity to meet up and celebrate together. Each valley or village organises its own festivities; all feature adults and children dressing up in costume. Ancient traditions – such as those of the Tschäggättä and the Peluches – can still be seen at certain locations. 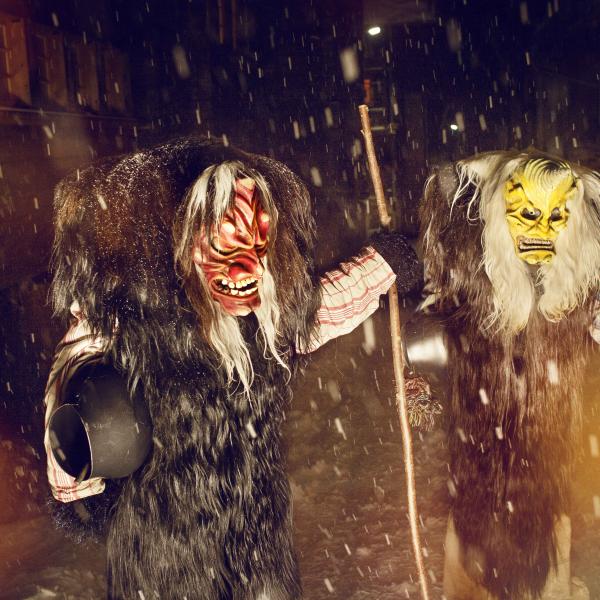 What is Carnival, exactly?

In general, Carnival covers the period between Epiphany (6 January) and Shrove Tuesday (whose date can vary between 3 February and 9 March), but most activities take place during the final six days. The first of these days is known in French-speaking Valais as Jeudi Gras (“Fat Thursday”) and the last day as Mardi Gras (“Fat Tuesday”). Carnival, in other words, comes just before Lent, which runs until Easter.

During these six days, the keys of the town are given to the Carnival prince or princess, who reigns until Shrove Tuesday. People gather to party at venues with bars run by local societies (football, brass band, etc.) or at the town’s cafes, bars and restaurants. Custom dictates that everyone dresses up, more or less following a theme that is set by the local Carnival association and which changes every evening. 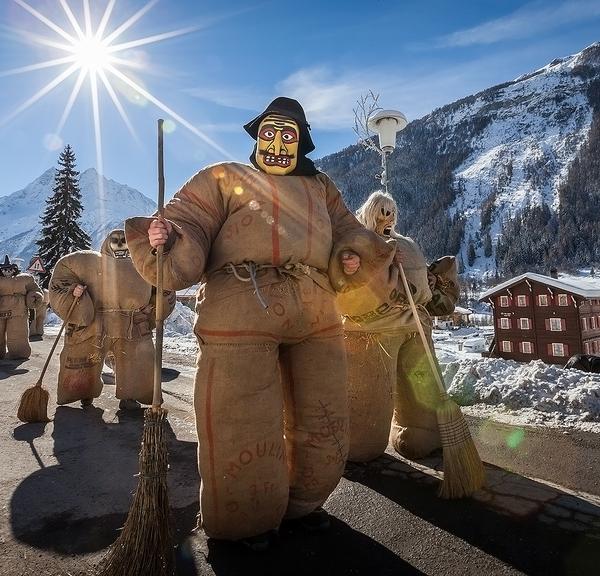 While there are no written records that allow us to determine definitively the origins of Carnival in Valais, historians suggest that some of these customs date to prehistoric times, when the first existing masks are believed to have been made. Rituals intended to banish evil spirits during winter already took place during the Bronze Age in Valais; such practices were meant to protect villages from avalanches and allow spring to come. The Peluches and Empaillés of Evolène, for example, certainly originate from this period.

While some Carnival traditions are famous (the carved masks of the Lötschental, for example, which have scared many a small child), others are less well known. Below, you can see pages devoted to the Tschäggättä and mask-carving; to the Gnooggärfüüdini of Erschmatt; and to the Peluches and Empaillés of Evolène.

The masked carnival figures characteristic of Lötschental, the so-called Tschäggättä, appear in the period bet...

In Evolène, the carnival season begins on Epiphany (January 6), when some young people run through the village...

Carnival is a convivial occasion that would not be complete without a few gastronomic specialities. Ponscheggl...

Other traditions linked to Carnival 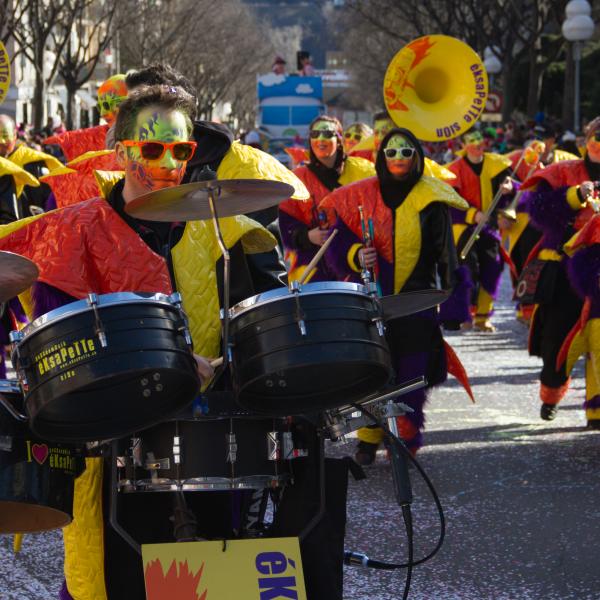 Guggens are musical groups formed of brass and percussion instruments. Members wear special costumes and tend to come from the same town or village; some already play in local brass bands, others may be beginners. These musical groups perform primarily during Carnival, when they play a mixture of popular music, traditional pieces and current hits. They are often invited to take part in Carnival celebrations other than their own, so that in a single evening, visitors can hear the local guggens along with guest groups. 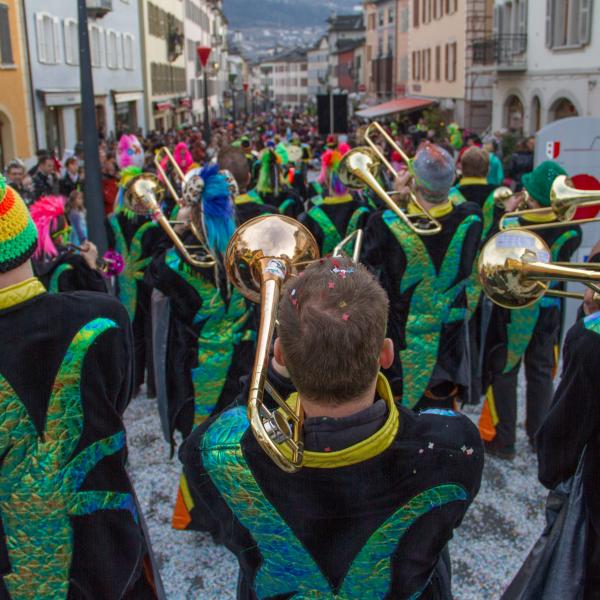 Among the Carnival traditions is the procession, during which guggens, floats and in some cases special Carnival demons (such as Tschäggättä or Empaillés) wind through the town or village along a set route. The floats are decorated in satirical style, making reference to events that have taken place during the year. Confetti cannons on the floats shower spectators with colourful confetti; the spectators, meanwhile, armed with bags of confetti themselves, respond in kind. Children wind up the procession with a confetti battle in the streets. 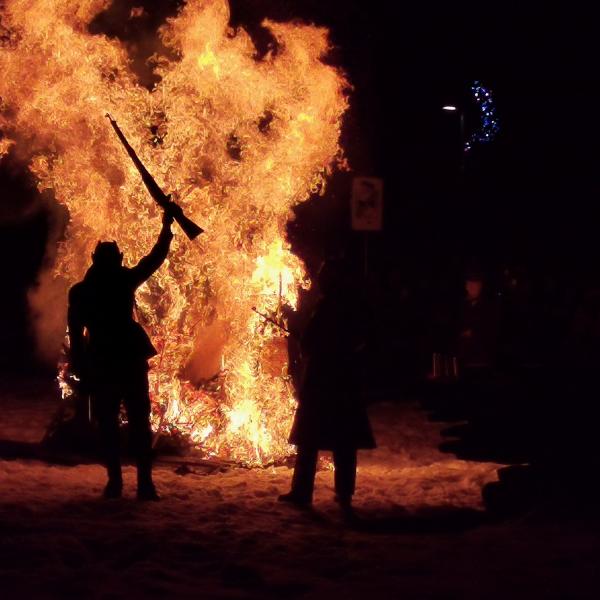 Carnival has always been linked to the end of winter and the arrival of spring. To symbolise this change of season, certain villages have a tradition whereby a figure representing winter (known in dialect as the Poutratze) is made from wood or papier mâché. “Old man winter” is then tried and sentenced to be “put to death” on a pyre. If he burns quickly, that means summer will be hot; if he takes a while to burn or if the fire goes out, that means summer will be wet.

One of the best-known Carnival celebrations in French-speaking Switzerland is unusual in that it begins the weekend before Jeudi Gras (“Fat Thursday”) with a “Petit Carnaval”. Another highlight of Monthey’s Carnival is Pimponicaille. This is the local name for the Carnival Monday, when a big celebration takes place; it also designates the Carnival hymn, which is played and sung regularly during the evenings at Monthey. 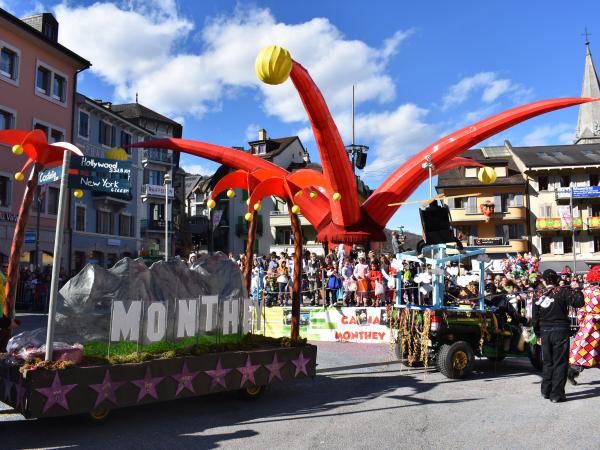 According to legend, the sorcerer of Sion was too much of a reveller for the town authorities, so he lived as a recluse all year in his tower near the Old Town. On Jeudi Gras (“Fat Thursday”), he is liberated during the traditional Réveil du Sorcier (“Sorcerer’s Awakening”) in order to celebrate Carnival. Another highlight is the procession of horses on Sunday, with riders in costume. 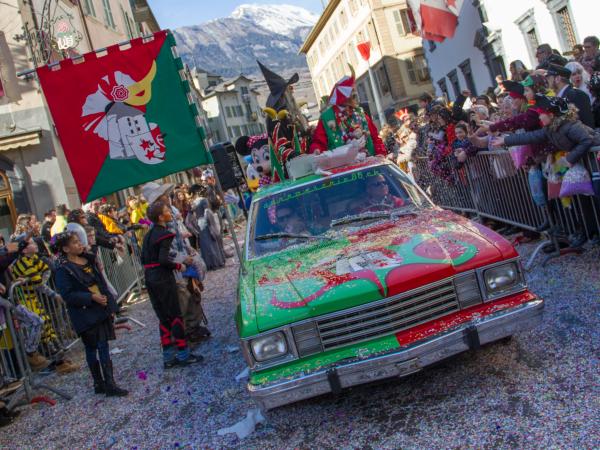 Carnival traditions are still very much alive in Evolène. It is here that visitors can see the Peluches and Empaillés – and also the Maries. These are young men dressed as women in traditional Evolène costume, who perform scenes from the life of Marie, a former resident of the village, in local dialect. 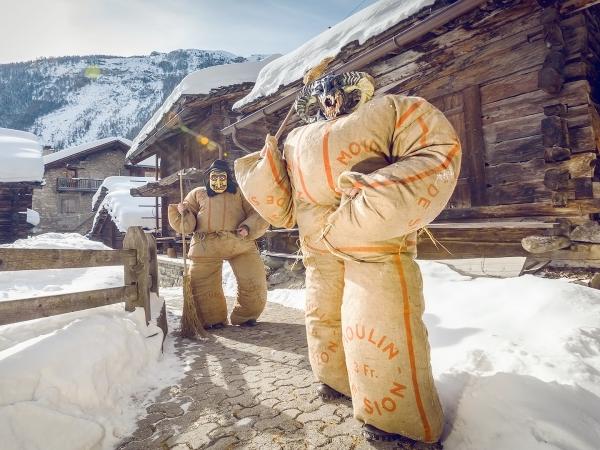 The Lötschental is THE key valley for celebrating Carnival in Valais. During this period, the villages are invaded by the Tschäggättä, who gather to sweep through the valley and scare passers-by during the big Carnival processions. 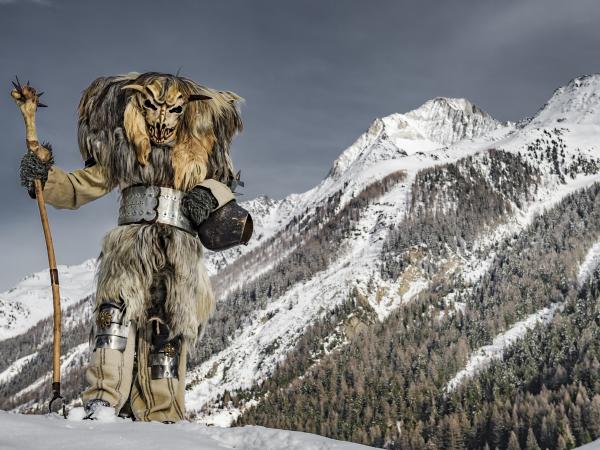