A source of pleasure and conviviality

According to legend, Léon was the name of the Valais wine-grower who invented Raclette cheese. On a cold day, he warmed up a piece of cheese over an open log fire, rather than eating it raw, and this quintessential Valais delicacy was born.
The presence of cheese in Valais has been documented since the 4th century BC. Alpine cheese was famous during the Roman period. Later on, it was often used as a means of payment, in lieu of wages to workers or as an export product. Cheese melting has been known in Valais as far back as the year 1574. The term ‘Raclette‘ comes from the local French dialect (racler = to scrape), and it became the official name for this cheese in 1874.
To this day, Valais cheese makers follow a recipe which has been passed down for generations, taking raw milk and making into the best and most authentic product which Valais has to offer: Raclette du Valais AOP.

Criteria for the AOP label 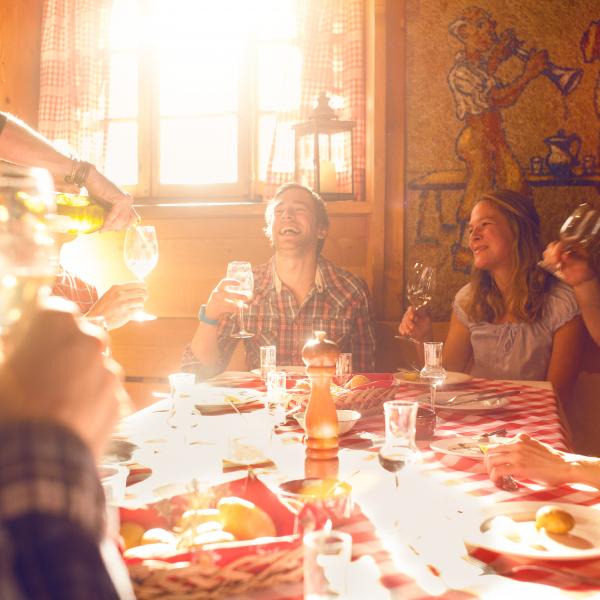 Raclette can be enjoyed sliced, as part of an “Assiette valaisanne” (“Valais platter”) or to accompany a “brisolée” (roast chestnuts served with cold meat and cheeses). But it is in melted form that the cheese has won fame. Accompanied by boiled unskinned potatoes, silverskin onions and small pickled gherkins, a Raclette is a delicacy best shared with friends or family. Purists prefer the wheel of cheese to be heated by a wood fire, but Raclette grills for half-wheels of cheese and electric Raclette grills (also called “raclonettes”) allow devotees to enjoy the dish at home.

The ideal accompaniment to a Raclette: a glass of white Fendant wine from Valais.

Tarte flambée with zucchini and Raclette from Valais AOP

Cholera from the Goms Valley

Risotto with asparagus grown in Valais